Chapter One, King of Doubt 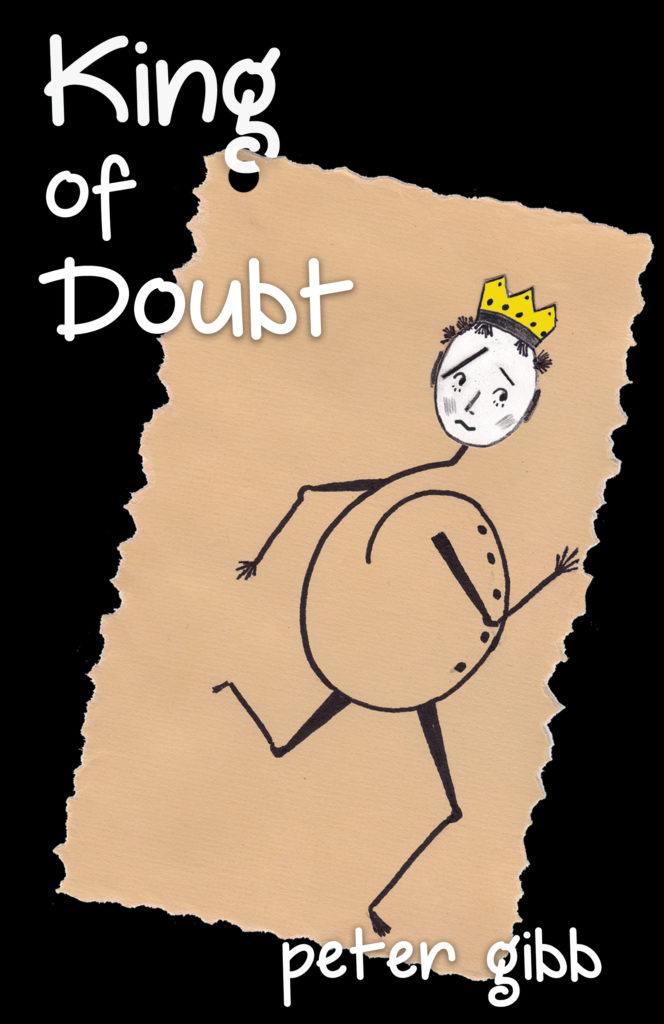 Available on Amazon.com, as Paperback and Kiindle e-reader

“Are ya ready, lads?” When the master’s voice boomed, even the rain paused to listen.

Twenty-three lads squirmed, waiting for the start of the race. Toes twitched and eyes searched. Wee ones were these boys, but fierce as the weather that slammed in from the Atlantic, thrashing the west coast of Scotland.

My lips quivered. I needed to pee.

Twenty-three lads scratched their private parts. Parents stomped their soaked galoshes and fidgeted with the buttons on their slickers.

“On yer marks.” The master’s voice again. The boys squeezed tight their bottoms. Twenty-three pair of shoes pawed the mud, racehorses chomping at the starting gate, muscles taut. My shoelace was untied. My shorts hung low. I was no racehorse. Made in the USA, from different stock than the Scots, I was the only Yank, and a scrawny one at that.

Off they went. Toes and feet and legs and arms, small but mighty, intrepid soldiers of fortune, sloshing through the mud of win or die. Twenty-three muddied bodies. One burning heart, anxious . . . but not about winning. “Will they like me?” was the fire that stoked that one, smoldering heart.

We were at Campusdoon School for boys in Ayr, Scotland, my first school, my first field day. I hoped there would never be another. Campusdoon rose out of the mist, so close to the ocean I smelled the brine from the sea each morning as my mother drove me up the winding driveway to the old stone castle that was now Campusdoon School.

On the field, the lads sped forward, while my spindly legs quivered like stalks of beach grass in the wind. All eyes followed Harold Tweedy. Harold was the fastest boy in Scotland, the only boy with a white zagged stripe on his blue shorts. Harold sped to the front of the pack as expected, while I stumbled about, dazed, chewing my thumbnail, half forgetting the race, searching the crowd and my classmates for a sign, any sign, of approval. Am I okay? Am I doing it right? Do you like me now?

Someone yelled, “Go, Harold. Go, laddie.” Harold was halfway to the finish while I staggered about, lost amid the also-rans. The pack surged forward. And then, suddenly, a gasp from the crowd. “What is it? What’s happened?” “It’s Harold. He’s . . .” Harold slipped. He righted himself. He slipped again. Now he was down in the mud, and behind him, McDougal tripped over Harold and then Buchanan and Burns, and following them, MacDonald and McBride and Calhoun, falling all over one another, tripping in the mud, screeching like cracked bagpipes, trying to get up, tripping sideways and backward, slipping and sprawling and stumbling, and then Bruce and MacGregor glanced over their shoulders to see, and down they went too. Boys in the mud and groans in the crowd.

A father’s voice sounded the national alarm. “Blimey, would ya look at that little bugger on the end. The wee one. The Yank, isn’t it? He’s the only one still standing. He’s goin’ ta win the bloody race.”

Heads swiveled. Eyes bored through me. I floundered, blowing about like a leaf in the wind, but somehow moving forward. My mother’s voice, a siren from the crowd, sang out: “Go, Peter. Run.” I lurched, one foot in front of the other—uncertain who? what? why?—and then, I stumbled across a white line and stood, shaking, surrounded by gray flannel pants and big umbrellas and the bug-eyed master, his hand gripping my shoulder, too tight.

The master steered me to a long table, covered by a muddy once-upon-a-time-white tablecloth and the prizes, boxed and lined up like the houses along Wheatfield Road. Dazed as a daisy in winter, I grabbed the table for support, wiped my snotty nose, and squished the warm mud in my hands. I turned, horrified, at the jumble of my classmates, a few now staggering toward the finish, others still struggling to right themselves in the mud. Why am I here, alone with the prizes? And the question that glowed neon in every cell of my body, Will the lads like me now? Am I okay? The glob of goo in my stomach told me that I had won the race, but lost something . . . something, what? Hard to say.

Something more important than a race on a muddy field.

The master’s face was drawn and glum. He patted my head. We posed for a photo. He slipped me the prize. “Well, laddie, here ya go. Jus’ like a sneaky Yank, found a dry patch o’ ground over yonder, ya did.”

Parents shook their heads and slunk off into the mist. “I dinna ken. A dark day fer Sco’land it is, this scraggly Yank snatchin’ tha’ winner’s prize from our lads.”

Calhoun sneered and tossed a well-formed mud cake at me. “Here ’tis, lad, have some good Sco’ish mud now, will ya, so ya ken wha’ tha’ rest o’ us ran through.”

Calhoun’s mud cake struck my heart. The prize was a box of toy soldiers. I held them tight to my chest as if these ten tin figures could rescue me from shame. I didn’t deserve the prize. I stared at the carnage on the field. “No!” I screamed, and the rain swallowed my wail.

We sat around the kitchen table, at dinner, the night of the race. Dad smiled and clapped his hands. “What a lad! You bloody well showed ’em.” I loved my dad. Of course, I never told him. Words like “love” were shoved to the back shelf of the junk closet in our house, wedged between old magazines and broken pencils.

“What a thrilling race!” Mom said. “A proud day for America.”

“Mother Margaretha told us we’ll have a cooking class at school,” my sister Virginia said. “There’ll be a prize for the best cake.”

“They don’t give prizes for cooking,” I said.

“They do too.” Virginia was two years older than me and a know-it-all.

“I haven’t seen your prize soldiers,” Mom said. “Have you played with them yet?” Mom was American, different. Her permed curls bound magically together despite the Scottish gales. She held her skirt tight around her knees when we walked to the beach.

“The weather at that race was shocking,” she said. “I’m sure it’s sunny and warm in Washington. I was not brought up for Scottish weather.”

Dad had recently moved us from Washington, DC, to the west coast of Scotland. A retired British Navy pilot, he had opened a pilots’ training school in Ayr. Mom was unsure if Ayr was the right place to bring up her children. “What’s so great about a kilt?” she asked when I wanted to wear my kilt to bed. “In America, all the boys wear pants.”

It was 1947. The war had been over two years, but rationing was still part of life in Scotland. Three eggs per week for a family of four, one quart of milk. Every day, Mom tore out two small green tickets from our ration book. “A crying shame, what we put up with here,” she said.

I was learning my way around Ayr—where to hear the bagpipes, which of the Scottish lads were most likely to torment me, and where Mom hid the cookies. I both loved and feared Scotland, where the wind blew stronger and the rain fell harder than any other spot on earth. Head down, slicker up, feet swimming in galoshes, two sizes too big, I battled the wind and my classmates daily.

I won the race, they have to like me now. Don’t they? I was getting used to the burr—lads who sounded like they were talking with a mouth full of pebbles. The school uniform was scratchy—blue gabardine shirts and a maroon and blue striped tie, knee-high gray socks and gray wool shorts. My knees turned blue as the sea every morning. On warm days, they thawed out by three.

Behind our house, the backyard was wild, rocky, and defiant, like Scotland. Before the race, I’d practiced there, racing Harold Tweedy around the yard, but he hopped faster than I ran. Harold was a winner. I was a loser. I hid my prize soldiers under the bed. The masters and the boys, the whole school would soon realize their mistake and come knocking at my front door, pointing fingers and jeering, demanding that I return the prize.

Except that Dad found and opened the box of soldiers first. “Lookee here!” he exclaimed. “Aren’t they wonderful? They’ll remind you of the race. You must be so proud.”

Looking at the soldiers gave me nightmares. I dreamed the boys from Campusdoon were coming after me, their eyes on fire, their bayonets fixed, like the soldiers, ready to gore me. At dinner the next night, I couldn’t eat. Mom gave me an extra helping of pudding. “For the fastest boy in Form One,” she said.

I shoved my pudding away.

I ran from the table. They’re coming. Coming to take the soldiers away. Coming to take me away. Winning the race didn’t make them like me. It made them hate me more. I am a fake. The masters know it. The lads know it. Everyone knows it now.

I continued to fool a few, mostly adults. I learned to say “Please” and “Thank you” and “May I be excused,” not much else. My parents approved of me. My teachers approved of me. I approved of their approvals, never imagining that I was looping a noose around my neck that would continue to strangle me for four decades. I made up a story that explained it all. I won a race. My parents applauded, assuming that coming in first meant I was a winner. But can you claim victory if you win a race and lose your soul? I was a loser. I was unworthy, a fake, maybe even a cheat. Year after year, I refined my story, packing in additional evidence of my nobodyness.

The first time you tell yourself a story about yourself, it’s just that—a story. The second time you tell the same story, it becomes a theory. By the third time, it has morphed into The Truth, incontrovertible, self-evident, and eternal. I told myself my loser story, first thing in the morning and last thing at night, on the playground and at dinner, over and over, day after day, year after year, until it became me. I became the story. I became the fraud.

Dad displayed my prize tin soldiers, spread out in a row, on their very own shelf, on the bookcase, in the living room, across from the front door. “Beautiful. Proud. Ready for action. Just like you,” Dad said. “Now everyone who comes to the house will see them, and I’ll tell them the story of how you won the race.”

The next day, when Mom and Dad were upstairs, I threw the soldiers into a bag. I fetched Dad’s hammer from the chest in the front hallway, took the bag out to the front steps, and smashed the soldiers into a hundred pieces. I dug a hole in the garden and buried the pieces as deep as I could. Then I came back inside, returned the hammer to the chest in the front hallway, and sat down as if nothing had happened.

As soon as he came downstairs, Dad noticed. He shook his head. “Where is your prize? Where are the soldiers?”

I didn’t answer. He dropped it, and Mom never asked.

As far as I know, the soldiers’ remains are still buried deep in that hole, under the Scottish mud. We lived in Scotland for another year. We never talked about the soldiers—or the race—again.