Mindful Conversation: The Power of Touch 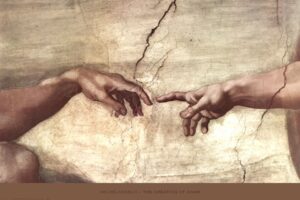 The Power of Touch in Communication

Mindful Conversation goes far beyond spoken communication, the traditional territory of ways to improve communication. Consider, for example, Active Listening, perhaps the most widely known strategy for intentional conversation, and a huge breakthrough in how to connect. Carl Rogers was an early pioneer of Active Listening and a giant in the field of interpersonal relationships. I was fortunate enough to study with Carl and count him among the most influential people in my life. I mean no disrespect to him in what I am about to say, but …

The Limitations of Active Listening

Active Listening focuses, as the title implies, on listening, which is an absolutely crucial skill for anyone who wants to be a good communicator. Active Listening teaches a specific way to respond to what others say, most often by repeating back the exact words, or a paraphrase of the words, as spoken. This technique is a huge improvement over most of what passes as listening but is actually what I call “non-listening.” However, Active Listening still ignores a huge amount of the territory of communication.

The Scope and Depth of Mindful Conversation

Level 3 is the “me – us” conversation, our largely subconscious dialogue with common humanity; a conversation that addresses the question, “Are we one with (in a dance) or separate from (in competition with) life beyond our own skin?”

The Impact of Small Gestures

Mindful Conversation emphasizes the power of two of the most common and underrated communication enhancers: eye contact and smile. If a picture is worth a thousand words, then eye contact and a genuine smile together are worth at least five thousand.

But beyond these two so easily available expressive connectors, I’d like to talk about the power of touch. Touch is more acceptable in some cultures than in others. In most of the U.S., non-sexual touch is relatively restrained, though it is more common among women than men. As a male who grew up in a distinctly non-touch family and culture, I’d like to compliment the women and ask you: Please help us men to catch up!

Let me share a story. Many years ago, I went on a student exchange program to Turkey and lived with a Turkish family on the island of Buyukada, found in the Sea of Marmara near Istanbul. I will never forget the first day when I went for a walk with my Turkish “brother.” We were strolling down to the harbor, getting acquainted, watching the boats bob up and down. Without any pretense or preamble, he slipped his arm through mine. We kept walking and talking as a wave of connection and affection passed through me. I had never experienced such a gesture—perhaps from anyone, and certainly not from a man. It was nothing sexual, nothing suggestive, nothing but a way of connection. And it was totally delightful.

Since that time, I have tried this same gesture—simply linking arms the way women and couples often do—with male friends a number of times. I don’t do it with everyone, and I don’t do it nearly as often as I could and actually would like to. I do it with friends and family, who, I think, will understand and appreciate it. I still get the same rush from it, a feeling of extra connection. I love it. So far, I’ve never been rebuffed. Never been laughed at, or misunderstood. I make this small gesture less frequently than I’d like, mostly because I’m not accustomed to it. I didn’t grow up in such a culture. But I realize I am missing out on a small practice of connection that I enjoy. And so, I, here and now, make the commitment to remember and experience that joy of connection more often.

A Challenge for Men: Try the Linked Up Connection

I’ve never suggested anything like this in a blog or newsletter before, but here goes.

If the “arms linked up” idea appeals, men, try it. (Ladies, you can, of course, also, but many of you already do. Think of this as a small move in the Men’s Liberation Movement.) Let’s start a trend.

If you’d like to read more about the power of touch, check out this Psychology Today article. Or, if you want the very latest academic research on touch as a tool for social interaction, check out Touch in Social Interaction. Or try the linked-up connection once or twice.

Try it when you feel so inclined, with someone whom you think would be understanding and accepting. If you are rebuffed in any way, simply unlink. If it flows (or if it doesn’t), talk about it. Talk about how you felt initiating such a gesture. What does it mean? Talk about any way that it shifts your relationship with the owner of the other arm. Talk about if it felt uncomfortable or unnatural. Talk about why we are so afraid of touch and what we might be missing.

This is all part of Mindful Conversation. And if you don’t want to talk about it, there’s no obligation. Write your own script. Just keep discovering your best way to connect with yourself and those whom you want to connect with.

If you try it, or even contemplate it, please let us know below. I’d love to hear about your experience, and I bet others would, too.